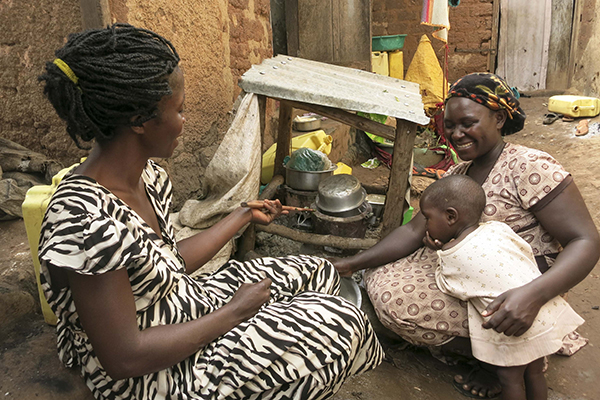 Many people who live in slum-like conditions are exposed daily to illnesses that can be prevented. Cramped housing and small spaces often force families to cook their food indoors using a small charcoal stove. Research shows that cooking indoors with charcoal increases the rates of pneumonia and many other lung diseases for those in the home. This is especially true for children, with pneumonia being a leading cause of death in children under five years of age. Research also shows that 99% of people living in slums worldwide cook inside their homes.

Most of the families we know in the slum communities cook daily inside their homes, exposing them and their children to smoke fumes that can lead to many illnesses. Mama Atwib is one of these mamas. Her son is in our Nutrition Program and earlier this year developed pneumonia as a result of indoor air pollution (he has now recovered). Pneumonia is a common and serious health issue in the slums that we aim to address with education and strategies to help prevent this killer illness.

We were excited to recently find two researchers from The Netherlands undertaking research in one of the slum communities. Their research focused on raising awareness among community members about pneumonia in children and cooking indoors. Many of our mamas, including Mama Atwib, in our newly formed Community Group were part of their study. We partnered with them and organised a large Community Gathering of around fifty people, involving local doctors, leaders and community members. This helped increase everyone’s understanding about the causes and symptoms of pneumonia through professionals and mamas alike sharing their knowledge. Plus, a video about pneumonia that we translated (from Medical Aid Films) was shown to the group in a local cinema using our new portable projector.

Another part of their research involved strategies for prevention of pneumonia by encouraging and enabling families to cook outdoors. In Uganda, we have two rainy seasons lasting a few months each, making cooking outdoors very difficult. To help remedy this, we worked alongside the researchers and community mamas to build a small shelter for stoves. This shelter is used to cover the food while cooking and protect it from the rain, with the added advantage of protecting children from stove burns (it could also be used for collecting rainwater). The response we had from the community was incredible. Mama Atwib is now able to cook outside keeping her family safe from harmful fumes, no matter the weather conditions – just weeks before she was cooking indoors. She spoke about the shelter at our Community Gathering with all the mamas and was so proud to be a part of it all.

The next step is to involve Mama Atwib in training all our Community Groups in preventing pneumonia through cooking outdoors using the newly designed shelter. It has been exciting to empower families through new knowledge and skills so that preventable diseases like pneumonia can be avoided, ultimately saving lives!